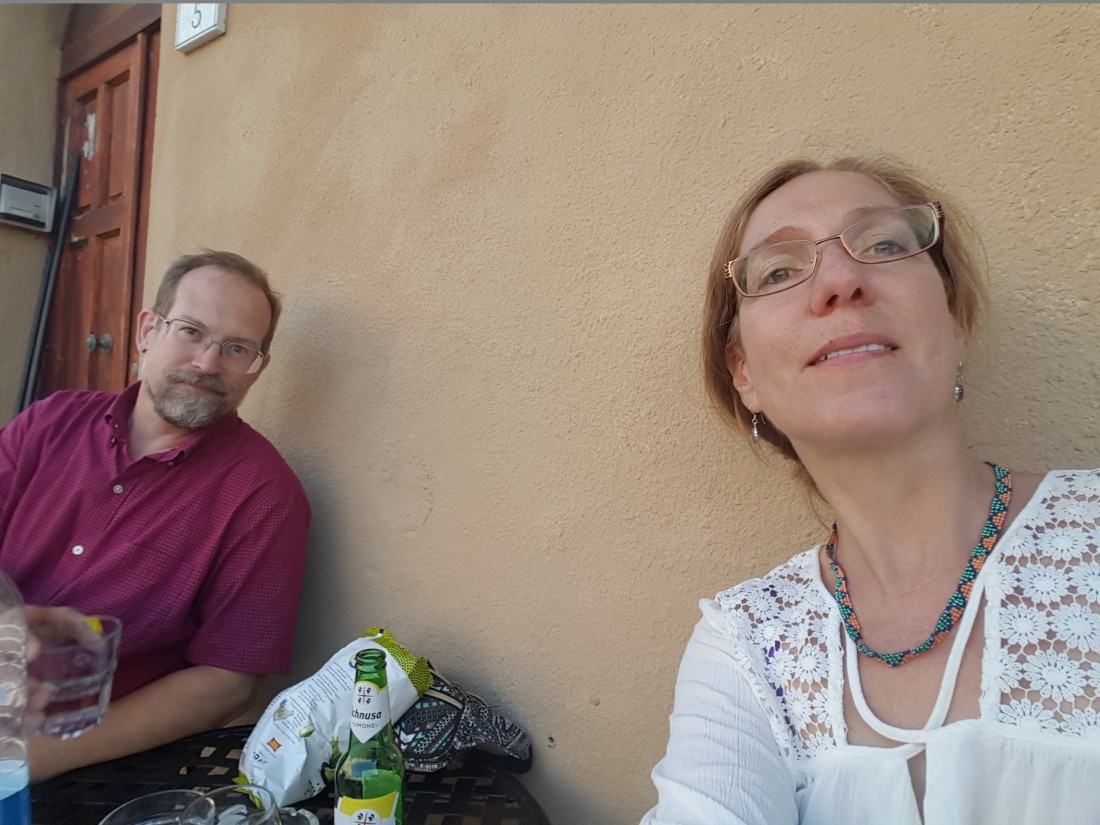 Go to Italy and join in!  Not necessarily in July.  But really, it didn’t matter to me that it was too hot.  I feel Italy in my blood and bones and my suntan.  I see my Gramma everywhere.  I always hope I take a little bit of it home with me each time. 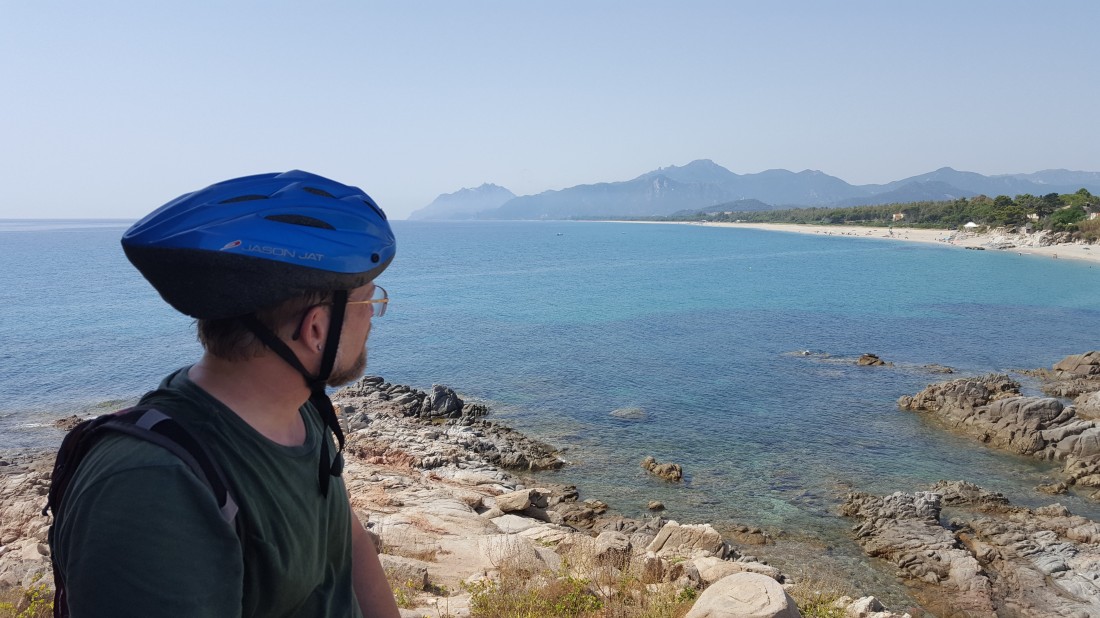 Gotta go with this one for Day 13.  Our last day in Sardinia – but I’m not leaving until I take ONE!  MORE!  BIKE RIDE! 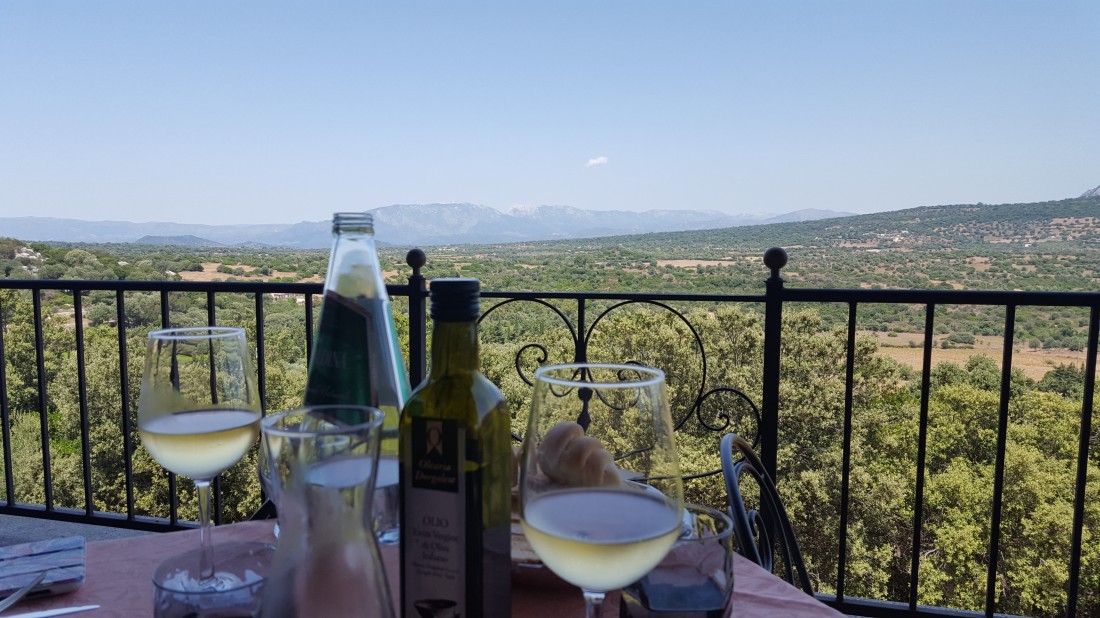 Happy birthday to Xopher!  Unfortunately his birthday was marked by a lot of driving; but along the rugged east coast, we stopped for a surprisingly elegant birthday lunch with a luscious view.

Winding down now…  the various things I thought we could pack into this day, back when I was in Vermont packing things into the schedule, looked not at all feasible or desirable anymore.  When we go back again, in cooler weather, we’ll have to spend more time on the east coast. 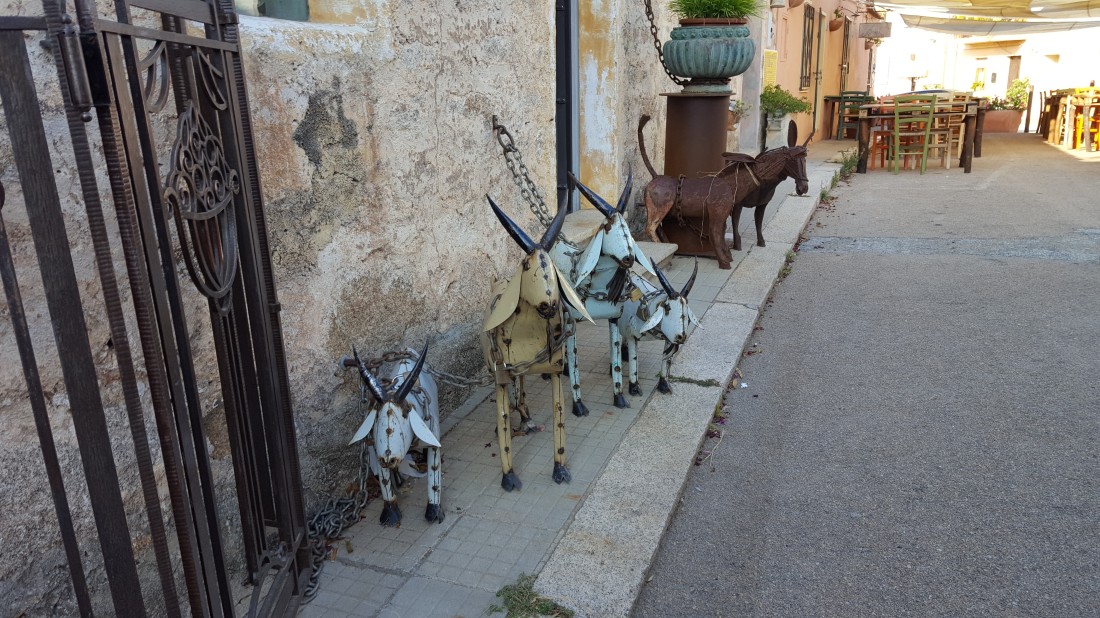 On day 11, there was snorkeling in Porto Cervo.  Port Cervo is where the jet set go to set their jets.  There were lots of yachts.  There were teenage/20s girls on the trip with flawless skin and bikinis that cost way too much to get wet; and two other families who didn’t talk to us.

No, it’s not exactly my scene, but Xopher had a particular aversion to the whole area, so on both our nights there, we traveled inland to spend the evening hours in more “authentic” towns.  Here are some metallic goats, chained up so they don’t roam away and chew all the scenery.  They were among the many charming aspects of San Pantaleo, an artsy spot where we art-spotted and people-watched and ate dinner both nights. 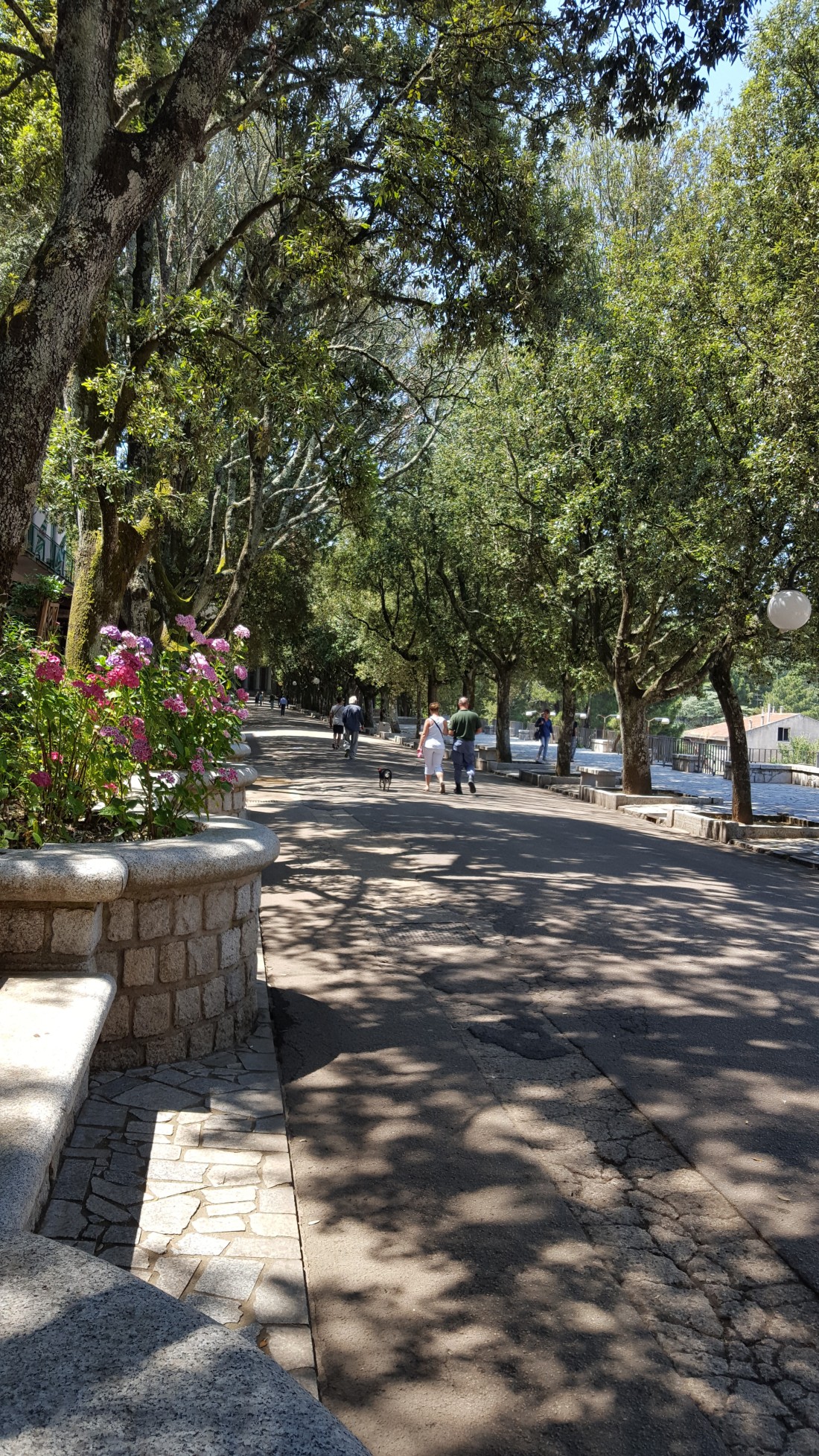 For Day 10, I am showing you Tempio, a random mountain town we stopped in on our next drive from one lodging to another.  It was high up and relatively cool.  There was shade, as you can see; there was this lovely wide shady walkway.  There was real stone arch brickwork, there were narrow European streets to get lost in.  There was a luncheon with specialties typical to the region.  I feel like I need to do an entire blog that is just the food. 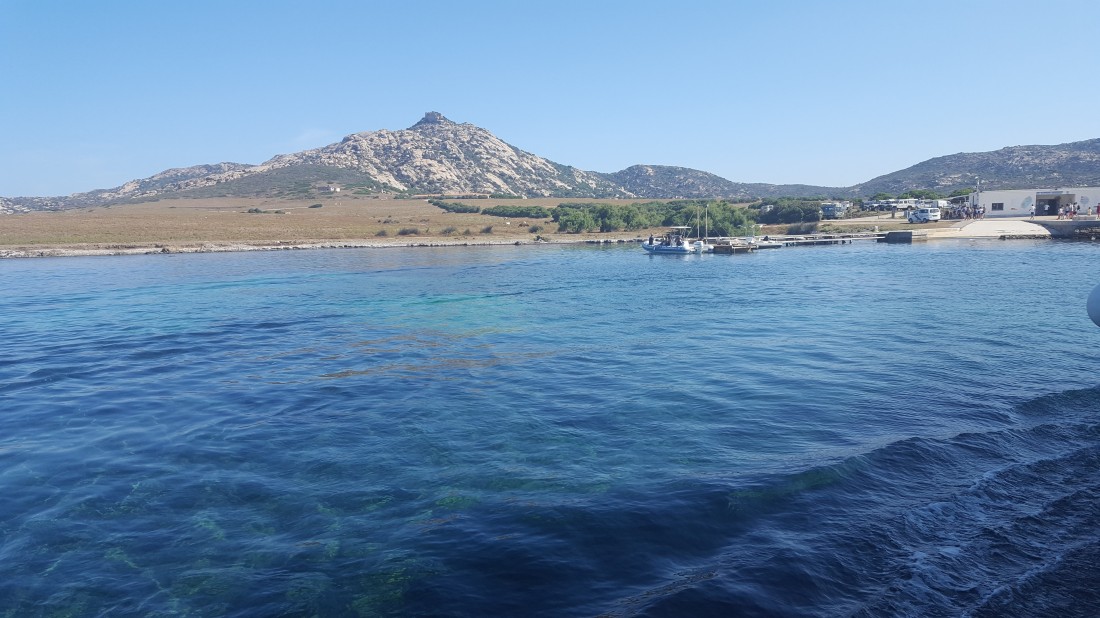 The most intense day of the trip. In a good way or a bad way?  Yes.

We took an excursion to Isola dell’Asinara, the “Island of the White Donkeys”, which is a national park. Feral white and non-white donkeys live here in peace and harmony, along with horses, goats, and sheep.  The island is only accessible by ferry; and ferry reservation is only accessible with payment; and payment can only be made via Italian post office bank card, or electronic wire transfer, so during planning phase back in Vermont I had to make a special trip to the bank to make this happen (and use Fedwire, and we all know how trustworthy THAT is).

Back to Asinara. Here you see our ferry approaching.  Exciting!  I was feeling good about the upcoming bike ride.  We had survived the one back at Oristano/Sinis; and this time we’d be without a guide, so we could go or not go wherever we wanted, however we wanted.

We picked up our bike rentals and off we went! Zoom!  Up an unshaded concrete path.  Which went on and on.  Relentless sun beating down.  No shade.  HILLS out the wazoo.  We kept going, kept hoping for a change of scenery, kept hoping that the highest peak was behind us.  I felt like I was in the middle of the Sonora desert.  It was just blazing.  There was no escape.  I kept forcing myself up those hills.  I drank water like crazy.

We got to a point where the land narrowed a bit, which was something like a landmark, and located our approximate position on the park map (more about that map later). I had been considering turning around, because things were just getting ridiculous, but we saw that we were closer to the beach and restaurant than we were to our starting point.  And we could also see with our own eyes where the beach lay below us, so it was going to be downhill.  So we made it to the restaurant.  I had fregola again.

And we managed to get back, because here we are.

And then, I think it was back at our apartment later that same day, we saw, on the park map that we had been handed when we got our bike rentals, literally down at the bottom in fine print, in English:

“Useful information: Given the strong sunshine and high temperatures that characterize the climate of the island, the reduced availability of water and the lack of shade, hiking and cycling are strongly discouraged in the summer months.”

This they give me AFTER renting me a goddamn bike.

I thought all along and afterwards what a good sport Xopher was being about the various fails on the trip, this in my opinion being one of the larger ones. Then just the other day, I asked if he had any superlative memories of vacation, any particular favorite, food, experience, etc.  And he said, “Asinara.”  Because it was intense, and we did it. 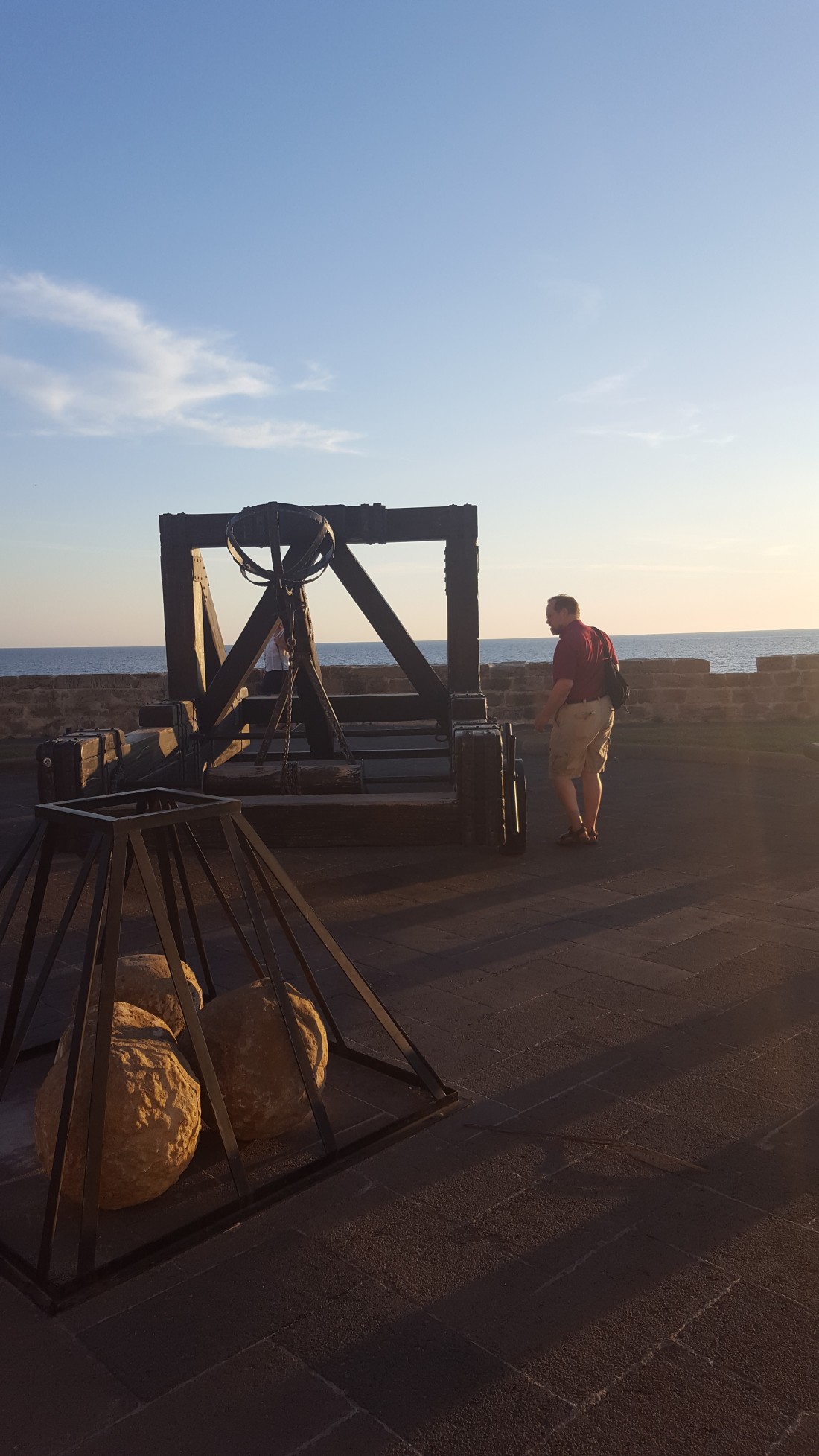 Day 8 began as a super-peaceful Sunday morning where we awoke early and proceeded to make an easy lovely drive down the west coast to the little town of Bosa where we had a scheduled snorkeling trip.  No pictures of said trip, as I feared my phone falling into the sea.  I enjoyed being zipped around the Mediterranean.

Evening 8 felt like a real treat – I got to be in Alghero again WITHOUT laundry logistix.  We went out as soon as the sun starting going down.  Above, Xopher is examining one of several catapults that line the city walls.  They are surely quite recent reconstructions.  We did not see them in operation.

We had the most expensive dinner of the trip, and it was thankfully worth it.  I had lobster, which I never do, so of course it was expensive.  They cut it up and served it “Catalan style”.  The restaurant was one of the many along the city walls, so we got to look out over the water, whenever people weren’t in the way; and people-watch, when people were in the way.  Alghero was my favorite town and the place I would return if and when I go back.

It also helped that we had a perfect apartment, the perfect distance from the center, ample parking day or night, with all imaginable amenities, its only flaw being an AC that it was difficult to turn OFF – a nice problem to have in Sardinian heat.

Reminds me of a South Park reference we came up with – “Ample parking day or night, people spouting BUONA SERA!!!”  If anyone remembers the South Park theme song anymore. 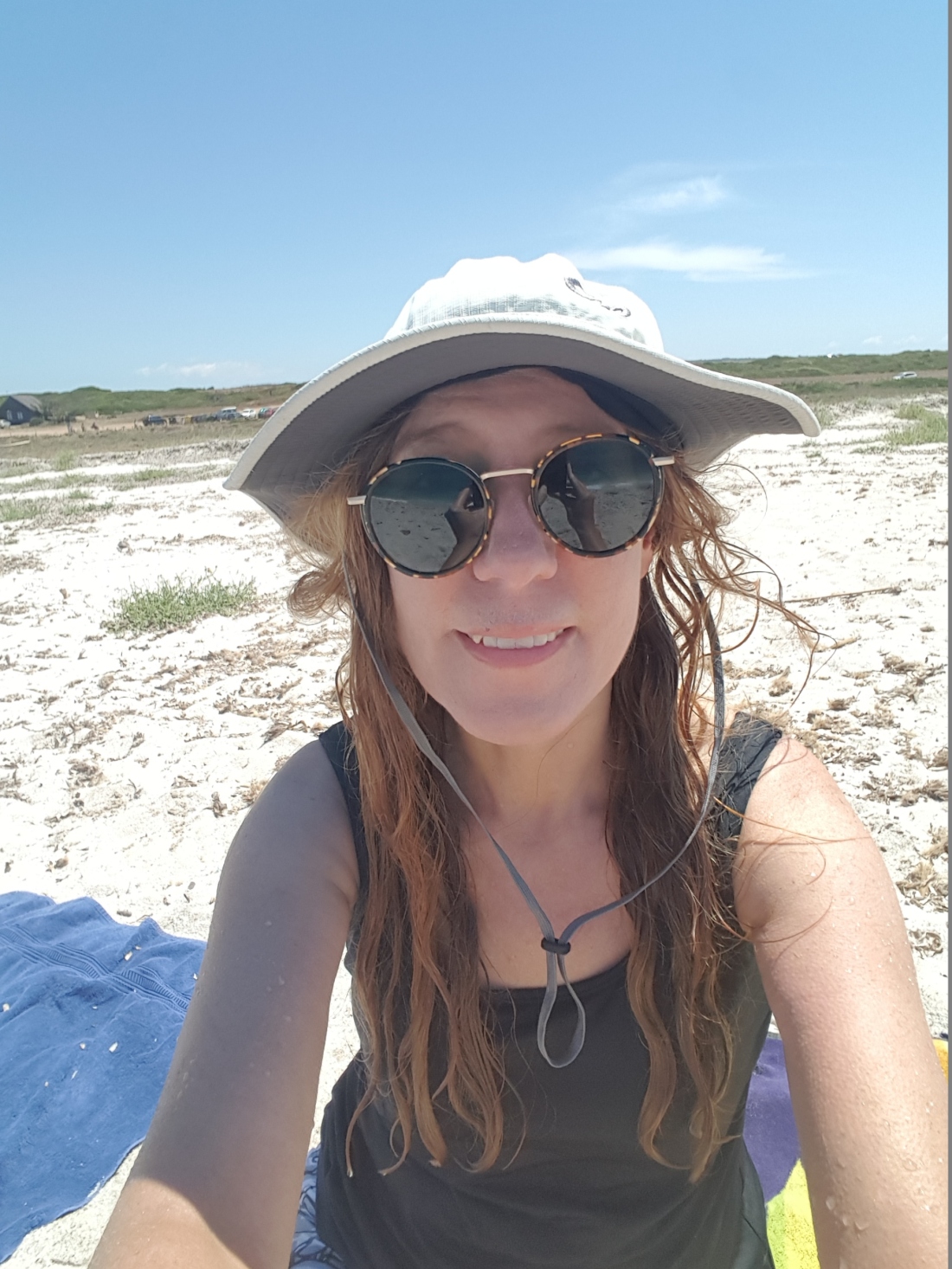 You’re getting another beach photo today.  Day 7 daytime was spent at the risotto-sand beach.  Evening was spent with the logistics of laundry.  We are not smart enough at packing or dressing to make it through 2 weeks without laundry.

Night was the best.  We had moved to our next city, Alghero, a medieval town like Oristano, but more of a city, and with city walls!  Stepping inside the city walls was magical and maybe I’ll have good photos of it on Day 8.  It was warm and pleasant, all the bars and restaurants were chock full of revelers, it was Saturday night and the World Cup was on televisions visible through every other window, and there were lanterns lighting the streets.  It felt like Old Montreal on an extremely rare warm summer night, but in Alghero this is every summer night.  And Montreal doesn’t have walls and a sea view. 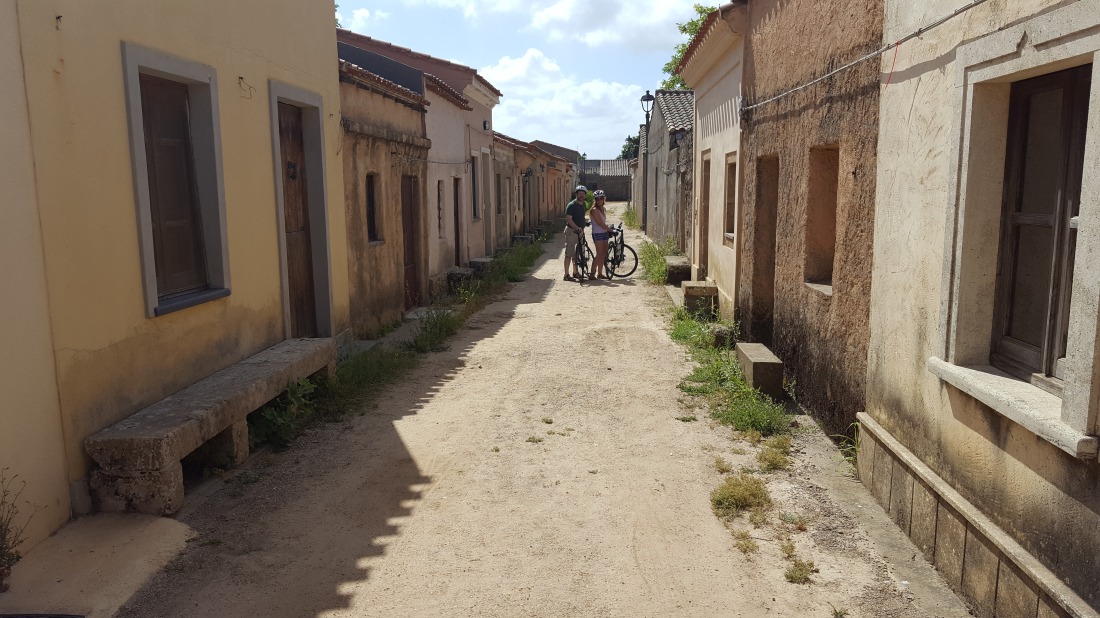 I like biking.  So, back in the cool oblivious comfort of Vermont, when I was planning this trip unprepared for the true meaning of Sardnian heat, I pre-booked a total of three bike tours!  Now the first day of reckoning had arrived!  I was more than a bit scared.

Our tour guide was American and he met us at our guest house with bikes.  He led us through town towards an area called the Sinis Peninsula.  We started bright & early at 8:30 AM, but the sun was quickly on us, and I was bathing in sunscreen.  Happily, the route was not too hilly and led us past breezy beaches; Robert stopped often pointing out plenty of lovely sites; and the terminus was one of those wonderful beachfront restaurants, where I got to have fregola a different way, with clams in broth.  I didn’t even much mind the ride back in afternoon sun, and the total mileage was something like 60km, a record for me to cover in one day.  High five us!

Here we are in a nearly vacant town (populated basically only once a year for a festival) called San Salvatore.  It was often used as a set for spaghetti westerns.  Mmmm, spaghetti…

Other sites included the white sand beach, with sand the consistency of (uncooked) Arborio rice and the temperature of (cooked) Arborio rice… and Tharros, the ruins of an ancient city dominated by two huge Corinthian columns which were wildly impressive till I read that they were reconstructions.  Why is that so annoying? 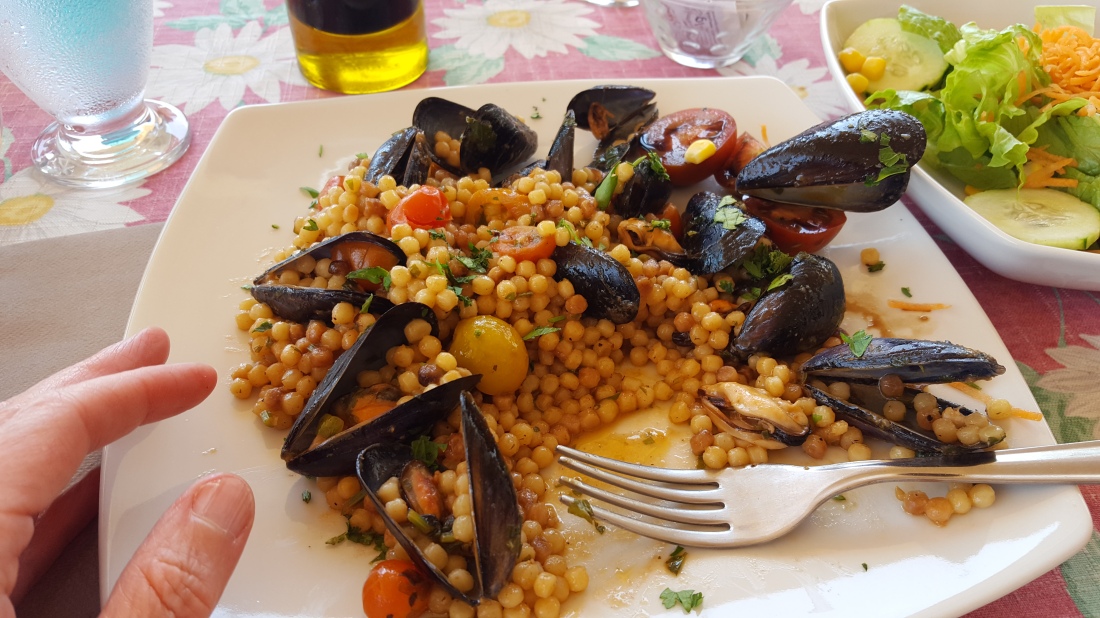 My favorite Sardinian food.  It’s called fregula (FRAY-goo-la).  It’s a small pasta, kind of like a large couscous.  It can be served all kinds of different ways, in a sauce or in a broth.  Attached was my favorite meal of the trip.  I’m not even a shellfish person; the pasta is the real star of the dish.  They cook it in broth so it’s packed with flavor.  Here you can see there are mussels, cherry tomatoes, whole cloves of garlic, herbs… and the whole experience was heightened by the cool breezy beachfront surroundings, and the thrill at how easy it is to find good food without trying.  This was a random beach restaurant in a random town we’d wandered into for lunch, killing time after checking out of Cagliari and heading to our next lodging in Oristano, a medieval town up the west coast.  History note, apropos of nothing: the beach was adjacent to a town designed by Mussolini and created out of swamps he had ordered drained.